Youth Movement For Hope And Reconciliation

We denounce with righteous indignation and dislike men who we are to beguiled demoralized by the charms of pleasures that moment, so we blinded desires, that they indignations.
News & Updates 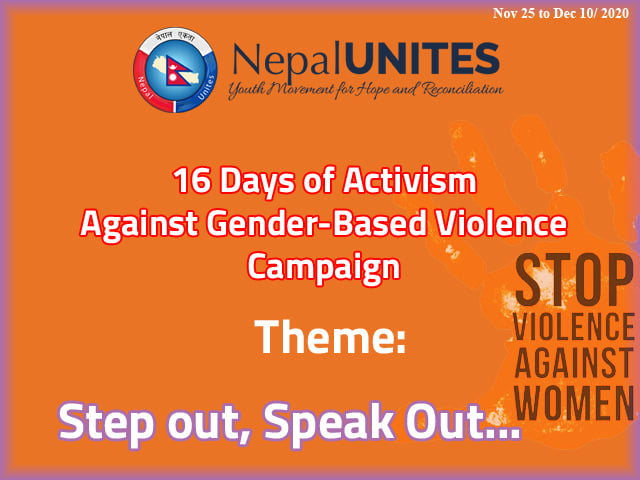 For the centuries, violence against women has been one of the most serious human rights violations. Globally every third woman faces physical, sexual, and mental abuse; as if it is one of the largest epidemics in the world.

However, it has never become a priority issue for the state authorities. As per the official data and the experiences of women’s organizations, the primary abusers are close relatives and people who are well known to the victims.

16 days of the International Campaign for the Elimination of Violence against Women starts from 25th November and culminates on 10th December, on World Human Rights Day.

Nepal Unites has been organizing the campaign since its inception.

The major focus is to make communities aware of the extent and brutal forms of Violence against Women. It is also proposed to engage young boys and men in supporting the campaign by taking responsibility for stopping both, privately and publicly.